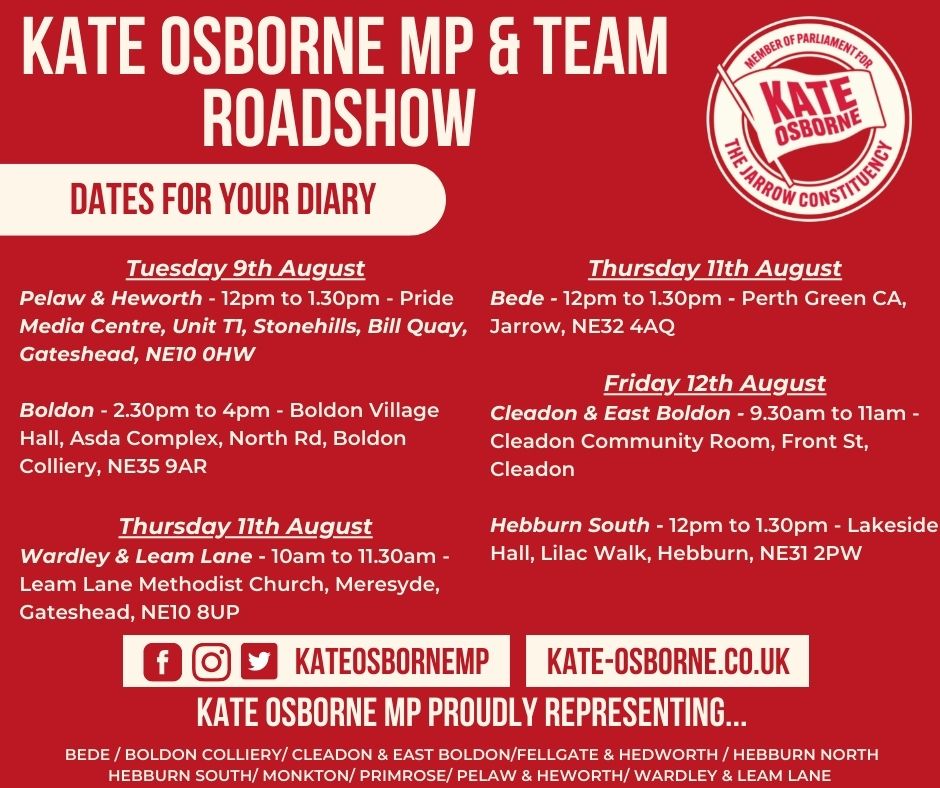 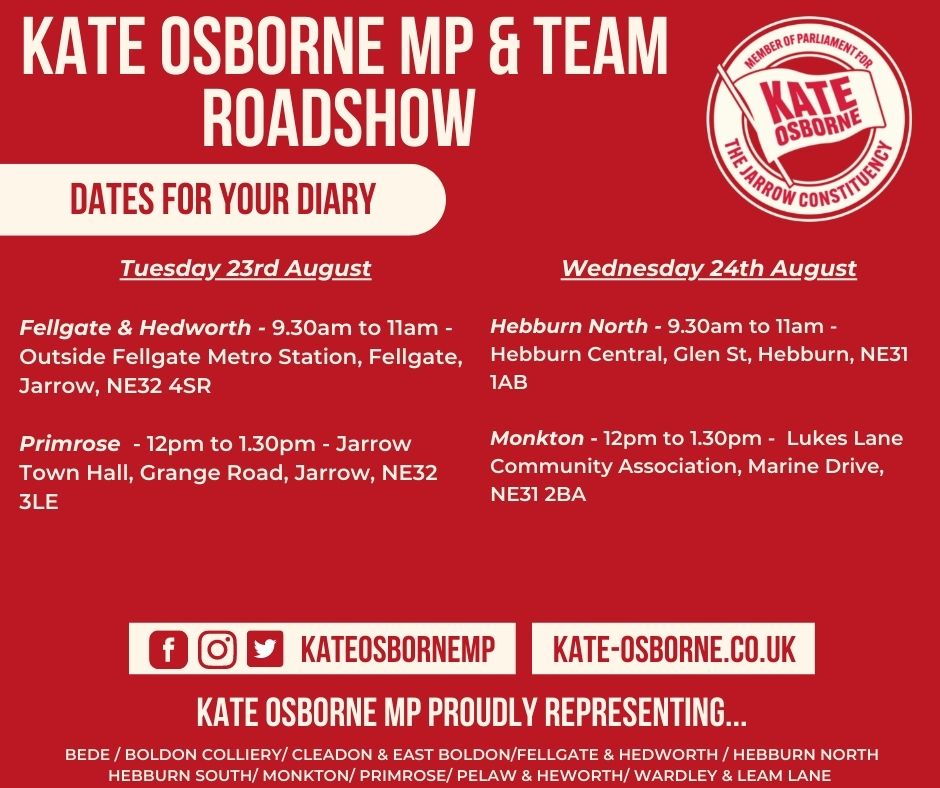 Jarrow MP Kate Osborne is launching a summer initiative to engage with as many people in the Jarrow constituency as possible over the next couple of months.

Plans include a summer survey as well as visits across the constituency, a roadshow in August, with a drop-in session being hosted in each of the ten wards within the Jarrow constituency.

At a time when many constituents are facing a number of problems from coping with the impact of the pandemic, to the drastic increase in food and energy bill costs, to issues with accessing NHS services and a host of other issues causing people concerns, it is even more important for people to know there is somewhere they can turn for advice and support as well as having their voice heard when Kate raises their concerns in Parliament.

The drop-in sessions will give Jarrow constituents to speak with Kate and her team as well as an opportunity to fill in the Summer Survey and share what their priorities are, both locally and nationally.

Each session will also give residents the chance to pick up some advice leaflets from local charities as well as both Gateshead and South Tyneside Council’s.

Kate Osborne MP said: “Over the recess, I think it is so important as an MP to get out around the constituency as much as I can.

People are under enormous pressure with a cost of living crisis and every day pressures and I am determined to ensure people know I am on their side.

I will focus on supporting constituents across South Tyneside and Gateshead throughout the summer.

I’ve also launched my Summer Survey as I want to hear from constituents what their priorities are going forward so I can ensure that I am best representing Jarrow constituents’ priorities when Parliament returns.”

“I hope to see as many constituents as possible over the summer recess so if you can, come along to the drop-in for your ward and have a chat with us!”

Earlier this week in Westminster, shameless Conservative MPs passed a motion of confidence in Boris Johnson’s zombie government – just days after doing everything they could to force him out of office.

Shamelessly, Tory MPs cheered when this doomed Prime Minister said he was proud of what he has done.

The same Tory MPs that brazenly voted to back his Government on Monday certainly didn’t have confidence in him last week when one after another, they resigned.

No one should be proud of his record. He has done nothing for communities across the Jarrow constituency.

Around 38 per cent of children across the Jarrow constituency are trapped in poverty.

So many families are struggling to cope with the ever-rising cost of living and inflation is at a 40-year high.

Equally as damning is the worrying increase in the number of working people who are being forced to turn to a food bank. Locally we are seeing an overall increase of 37 per cent in Food Bank usage over the past 12 months. Hebburn Helps food bank have informed me that over the past year there has been a 29 per cent rise in Food Bank usage from working people alone. These figures highlight the neglect of our community by Boris Johnson and his Government.

Our communities have been neglected over the past 12 years of Tory rule as they have ploughed ahead with their relentless attacks on working people.

Boris Johnson repeatedly churns out the line that he ‘got the big calls right’ yet during his premiership child poverty has increased by over a third in Gateshead and South Tyneside alone.

Parents are skipping meals to feed their children, and families are even selling the family car and cycling to work, just to get through their daily struggles as the cost-of-living crisis hammers people hard.

The Tory leadership candidates will promise the earth but the one thing we do know is that they will do nothing for the North East and communities like ours.

Multiple Government departments have already been thrown into disarray causing chaos for constituents when contacting the Passport Office, Home Office and the DVSA to name but a few, and they are being let down.

The NHS is in crisis, with a severe lack of funding, a crisis that goes back to when the Tories joined forces with the Lib Dems back in 2010.

These are the big calls that Johnson has got wrong time and time again and things won’t change with a new leader.

This week I had no hesitation in voting no confidence in this Government and if the Tory MPs had the same conviction as they had last week, then they would have done the same.

The Tories need to go. Now!

As Boris Johnson continues to head from one disaster to the next, with a host of resignations from his own MPs and support from his own Ministers falling quicker than a set of dominoes, his disastrous time in Government will be symbolised by sleaze, austerity, lies and relentless attacks on the working-class.

We will never forget how Boris Johnson and friends partied in Westminster whilst the rest of the country was making the most difficult of sacrifices imaginable.  What we have had over the last few years is a Government that has used the Covid Pandemic, to maximise profits for their cronies and to undermine workers rights.

This Tory Government is underpinned by hypocrisy and unfairness.

We knew that Boris Johnson’s time in charge would be centred on one rule for us, one rule for them – though the scale of the lies and incompetence was hard to predict!

Whilst the Tories continued jeering at each other it is our communities that are suffering from their failures.

And we will never forget their attacks on our public services.

Yet our communities are resilient and we will demand better – last month the Jarrow Rebel festival brought campaigners and communities together and this weekend marks the return of the fabulous Durham Miners’ Gala for the first time in three years.

The Big Meeting has been sorely missed by our communities across the North East and I can’t wait to join the thousands who will descend upon Durham on Saturday.

The Gala, a great trade union and community celebration, is always a wonderful spectacle, with  anthems played by the brass bands and the colourful, imposing banners from the mining community, all of whom carry defiant messages of solidarity, have never been as symbolic after the hugely difficult times many of us have endured during the pandemic.

Standing together with the trade unions from across the country will be those who represent Britain’s Covid heroes.

Earlier this week, we celebrated the 74th birthday of the NHS.  Over the last couple of years, it has had to work for us like never before. We owe a huge debt of gratitude for our NHS heroes who have put their lives on the line to support the country throughout these testing times.  Today I raised in parliament the issues with North East Ambulance Services, the investigation into cover ups with details being withheld from the coroners in as many as 90 cases and the waiting times for ambulances and A and E – waiting times that can and have had devastating consequences for individuals and staff unable to provide quality care – of course you cannot look at the rise in waiting times in isolation.

This Government instead of investing in our NHS and staff are insisting staff take a real terms pay cut and attacking Staff sick pay – our NHS cannot sustain the current level of attacks from this Government and inevitably it is going to be both staff and patients who will suffer. It is a disgrace that the government are attacking workers that are keeping us going through covid – workers putting themselves at risk every day going to work to protect us – called heroes one minute and vilified the next.

In Durham this weekend, I’ll be joining the nurses who worked tirelessly on the frontline in the most difficult of circumstances; the care workers who looked after the most vulnerable in our communities; and all of those unsung heroes on the frontline who kept our country going.

These are the same people who continue to suffer from low levels of pay that leaves them, like so many others, struggling to keep up with the spiralling cost of living. Many other workers have been left with no choice but to turn to a food bank which is the biggest indictment of this Government and its disastrous time in power.

It’s been a long time coming but I for one can’t wait for the return of the Durham Miners’ Gala which will signal hope, unity, and a host of communities who will stand proud to say to this Conservative Government that enough is enough.  I hope to see some of you there!